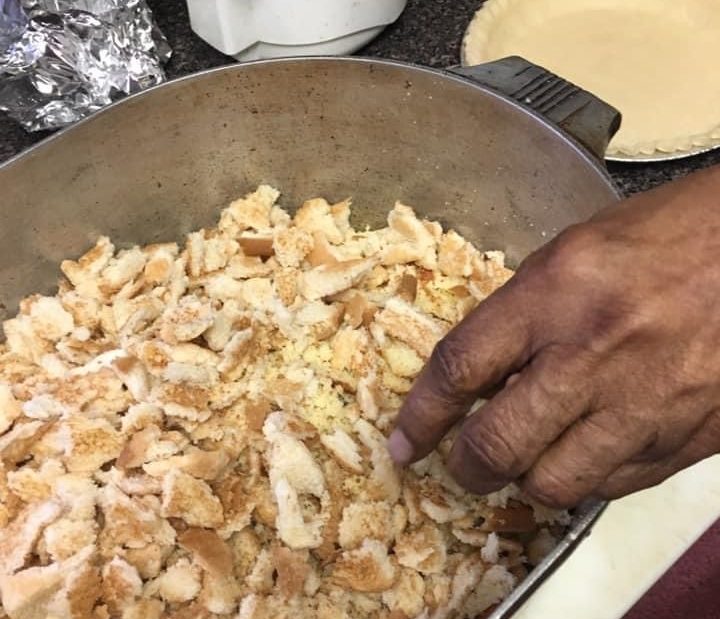 Many moons ago, I spoke about how my grandmother was the one who inspired me to cook.  She wore many hats before retiring from a tire plant and as a beautician.  When she was a little younger than the age I am now, she was the head cook for the Lieutenant Governor of Texas.  (Back then black women were never referred to as chefs, but that’s actually the role she held.)  She was a beast in the kitchen up until she stopped due to age and loss of appetite.

She was affectionately referred to as “Bigmama” by all who knew and loved her, she passed away two months ago.  It still feels weird to write that.  Her legacy continues to brew inside of me in different ways, but I have been noticing lately how much I want to mirror her work ethic.

I don’t think I ever really grasped just how hard she worked up until her late 70s.  Bigmama consistently worked 2 or 3 jobs throughout the rearing of her children, but she never stopped cooking nourishing meals for the neighborhood.  Having 7 outgoing kids, stragglers were often staying for dinner.  At her funeral, my dad spoke of her always having enough to feed extra mouths.  It was humbling to see the standing room only amount of people that came to her service, many of whom were fed from her kitchen.

No one can make Chili Beans like my grandmother, even the pastor spoke of her famous beans during her service.  I want to rekindle my love for cooking in this way.  I always felt inferior to her in our cooking skills, but I still remember when she liked what I cooked.  I often would send or take a plate over to her whenever I visited my parents’ and cooked a big meal.  I never wanted to stay and actually watch her eat it, I would be too nervous.  She would call me when she felt it was outstanding, I would feel the smile through the phone.  Those memories and feelings of pride will stay with me until I’m old.

I remember one particular meal I cooked a decade ago where I made Macaroni and Cheese.  I was SO nervous about making it, but I decided to try a Tyler Florence recipe that included caramelized onions and bacon.  She literally swooned.  Even my very particular uncles thought it was a hit.  That memory remains vivid in my head.  I also remember taking her meals and Knowing they were amazing, I would grin so wide setting them in front of her, I think she knew how much I wanted to make her proud.  I loved that she was also nice about critiques.

For the longest time, I thought she used Jiffy cornbread mix when she made her infamous Cornbread Dressing.  One year after delegating the task of making dressing to me for our large family dinner, she talked to me to the side that it was a little sweet.   After a small discussion, she shared with me how to properly make it with a scratch-made cornbread recipe.  She never talked down to her granddaughters about the attempts we made with her recipes, she only offered us suggestions, her actual daughters were a different story!

Words truly seem trite with describing my grandmother.  She was too grand of a figure in my life.  I carry her around everywhere I go, and am looking forward to seeing what she does through me in my cooking.  I feel like she’s been urging me lately to push harder in what I make, food-wise and in my other creative outlets.   There’s more in me than I’ve released.  I think I’ll use this weekend to try her cornbread dressing again.  I love you, Bigmama.  I will keep cooking.