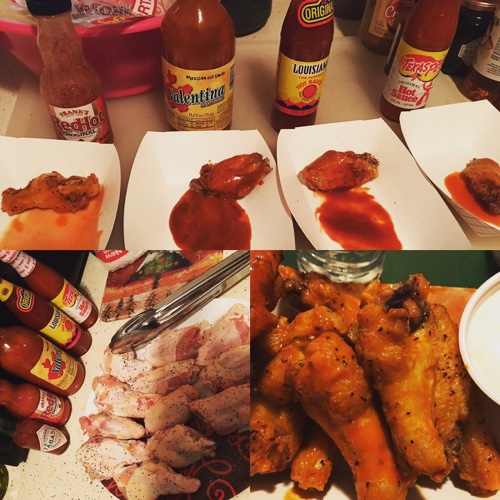 I recently watched a couple webisodes of one of my favorite Youtube networks, First We Feast about the love of Buffalo wings.  I knew it was time for a true ‘thesis’ of my own on why I am obsessed with such a small part of the chicken.

According to the mastermind historian, Wikipedia, the buffalo wing was introduced in Buffalo, NY in the 1960s. Like any other national treasure cuisine, there is debate on which restaurant actually invented it.  Apparently great minds think alike….near the same year.  The OG’s of wings had a great idea nonetheless, and millions sell annually, especially on game days.

Growing up, I never was a fan of chicken on the bone.  I remember being young and begging my parents to order me chicken strips on Kentucky Fried Chicken Sundays.  Loathe is not a strong enough word about how I felt about bone-in chicken.  I hated the gristle, the little veins, and the bone!  I would eat the skin and a little of the meat on my drumstick and throw it all away, wrapped up tight in a napkin. In my early adolescent years, we tended to have chicken night a lot; baked, fried, smothered, and/or covered.  Both of my parents grew up eating whole pieces of chicken, and it wasn’t until I was a pre-teen, that we really started having boneless skinless breasts at dinner time.  When the tide changed in my favor, I never looked back!

As long as the gristle was gone, I didn’t mind even if it was overcooked: give me your tough, give me your dry, keep your bone!

I remember my dad getting the KFC breaded wings whenever we had a big order.  Intrigued by the spicy flavor, I would ask for one but never ate the whole thing.  Since only six wings came in a serving, my pop rarely shared, especially with his kid who disrespected the chicken like that.

I was older when we began eating at Outback Steakhouse on family road trips.  I quickly fell in love with the Kookaburra wings.  They were breaded and oh so flavorful!  I began nibbling ON the actual bone!  Soon after, I fell down the chicken wing rabbit hole and ordered them from everywhere.  I still couldn’t suffer through the flats, but the drummettes were my go to order.

Moving to OKC allowed me the opportunity to live less than a mile away from one of the Wingstop franchises.  I have become a fan of multiple flavors over the last five years including the very popular lemon pepper.  I’ve always paid the extra buck to get all drummettes because I’m grown, and I do what I want.  Since I’d found a loophole in avoiding flats, I haven’t given them a second thought, that is until this past Saturday.  Something happened that changed my entire outlook.

I woke up in the mood for wings. Bad. It was a craving that took over my entire thought processes. I have been having a love/hate relationship with my local wing spot.  The inconsistency in customer service and cookery has been very irritating.  I decided if I wanted to have a good experience, I needed to have a little adventure and make some myself….I am a chef, I guess actual cooking comes with that.

When I got to the store, all of the drummettes were gone!  Unfortunately, cravings for wings on game days are not uniquely mine.  I searched high and low and finally found a small package of both drums and flats.  I thought to myself that I would use the flats for stock to combat waste and I would fry up some potatoes to fill me up.  As I was walking down the sauce aisle, I got the idea to have my own wing-off, fry up wings, and compare sauces.  I am a homebody, so these are the types of weekend adventures I conjure up for myself.  After purchasing my wings, peanut oil, and 5 different brands of sauces, I raced home to have a little fun.

I discovered only 5 drums in the package and knew I would have to use those goshforsaken flats if I was going to make this ‘competition’ worthwhile.  I don’t know what happened, but I took those flats to another realm of crispiness.  They were magical!  I’ve only had them at restaurants after they’ve been soaked in sauce and had gotten a little flimsy.  This freshly fried and quickly sauced (not drenched) technique changed the game for me.  I actually ate the drummettes second!  After much thought and way too much analyzing for someone not judging an ACTUAL cook-off, I declared Frank’s Red Hot the winner.  I didn’t waste a wing on Tabasco…I don’t even know why I bought it.

I don’t know if I have totally changed over to the #flatsteam but I know if I’m cooking them, I’m eating both!