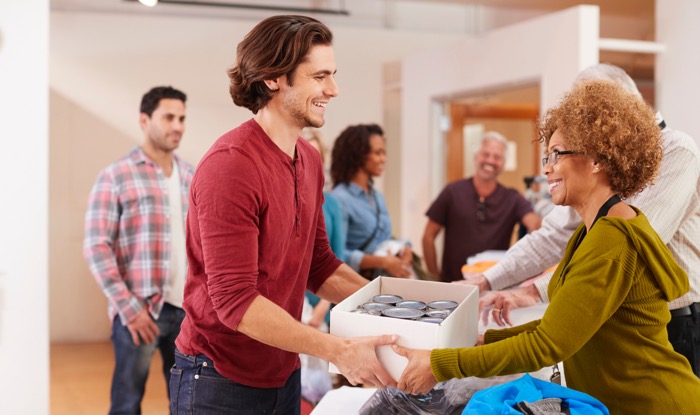 Dusti Ridge leans on her cane and waits patiently for her number to be called at Bread for the City, a food bank in southeast Washington, D.C. When she hears “56,” she steps into the nonprofit group’s pantry to find out what she’ll be eating for the next week.

Kale, green peppers, yellow tomatoes, and dried cherries—perfect for a favorite brown rice recipe—go into her shopping bag. So does a whole chicken. But she passes on canned green beans; too much salt, she says.

Ridge, 62, has been coming to the food bank once a month for more than a decade, and takes pride in choosing “exotic” foods that some of the charity’s clients avoid—like the venison that was donated recently after deer in a local park were culled.

Ridge is typical of millions of Americans who rely on food banks to survive: She is in poor health and lives on disability payments as she undergoes chemotherapy treatments for ovarian cancer. But as a nationwide study released Monday by the nonprofit group Feeding America makes clear, the number of people who rely on food pantries, soup kitchens, school lunch programs, senior citizens’ Meals on Wheels deliveries, or other food initiatives to supplement their daily diet is a complex and growing mosaic that cuts across the nation’s demographic lines.

About one in seven Americans—more than 46 million people—rely on such programs to get by, according to the study, which involved confidential surveys of more than 60,000 recipients of food aid from groups affiliated with Feeding America, a network of 200 food banks that distribute donated food to programs in all 50 states.

The ranks of the hungry include 12 million children and 7 million seniors, plus millions more among the working poor, military families, the unemployed, and young college graduates. Those in each group said their reliance on food aid stemmed from a daily struggle to put healthy and nutritious food on the table when all that many can afford is inexpensive processed food that fuels a cycle of chronic diseases such as diabetes, hypertension, and obesity.

The study, called Hunger in America 2014, comes nearly a year after the U.S. government reported that a record number of low-income Americans—more than 47 million—were receiving food stamps through the Supplemental Nutrition Assistance Program (SNAP). The study by Feeding America found that just 55 percent of those who get aid from its affiliated programs also received food stamps. One in five said they had never applied to the federal food stamp program because they believed they wouldn’t be eligible for such help.

The study’s suggestion that perhaps 20 million or so people are receiving local food aid but are not getting federal food stamps indicates that the scope of America’s hunger problem is likely well beyond the enrollment figures reported by any one aid program—and could touch about one-fifth of the nation’s population.

“Feeding America is feeding more people than ever before,” said Maura Daly, a spokeswoman for the group. “The public-private partnership in addressing hunger in America is essential.”

Puna Dawson, left, helps to distribute goods at a food bank in Lihue, on the Hawaiian island of Kauai. About one in seven Americans rely on such community-based aid for at least some of their food, according to a new study by the nonprofit group Feeding America.

The number of households the U.S. government considers “food insecure,” meaning they don’t always have enough to eat, was 17.6 million, or 14.5 percent, in 2012. Among those whose hunger leads them to the nearly 100,000 food pantries, meal programs, and other food agencies in the Feeding America network, 84 percent said they suffer from food insecurity.

Such households “have a particularly vulnerable population,” said Caroline Ratcliffe, a senior fellow at the Urban Institute, a Washington think tank, who was not involved with the survey.

The Feeding America survey’s findings are in line with those in a recent National Geographic report, “The New Face of Hunger.” Feeding America’s survey found that many Americans seek food assistance on “an ongoing basis, reflecting persistent need.” It also provides a snapshot of those who seek aid from food banks and other local programs across the nation:

Loaves of bread and other goods lie before an image of the Last Supper at a food bank in East St. Louis, Illinois. Across the U.S., those receiving help from such food programs include 12 million children, 7 million seniors, and millions more among the working poor, military families, the unemployed, and young college graduates.

Feeding America officials said the findings about aid recipients’ nutrition and health were among the most alarming results in the report.

“We find it particularly staggering that more than half of the households that we are serving report that someone has hypertension, and a third have diabetes,” Daly said. “We know that these are chronic diseases that are intricately related to food intake—not just accessing food but accessing nutritious food. It’s really illuminating why hunger is a public health issue.”

The survey also asked clients how they make ends meet, and found that coping often means not paying the electric bill to buy food instead. Or walking instead of taking the bus to save money for lunch. Or forgoing medicine or a visit to the doctor in order to eat.

Food bank clients also reported getting bargains on food that was in damaged packages or past its expiration date, and watering down food or drinks to make them go further.

“The people we are serving are forced to make very difficult choices on a daily basis between food and other basic needs, like keeping a roof over their head, turning the lights on, getting to and from work or their kids to school,” Daly said. “These are choices nobody in the wealthiest nation in the world should have to be making.”

Those are familiar choices to Dusti Ridge; while undergoing treatments for cancer, she must lug around a gallon-sized plastic bag carrying 17 prescription drugs for various other ailments, including diverticulitis and kidney disease.

The District of Columbia resident says that she has to make tradeoffs and be creative to make sure she has enough to eat each month. That means no going to the movies, and when she shops for food in grocery stores, she goes only to stores that double the value of coupons.

“I don’t go anywhere without my coupons,” Ridge said, fishing a handful from her bag. “I just got $50 worth of food for $19. I think that’s pretty good.”